The orange is the citrus fruit of the orange tree. It is a hesperidium. It is said to come from a cross between the grapefruit and the mandarin in ancient China, long before the travels of the great Marco Polo in the 13th century. We are talking about a fruit that is widely distributed throughout most continents.

From Asia to the Middle East, arriving in the peninsula around the 12th century, introduced by the Arabs. The Spaniards took it to the Americas, so we have one of the world’s best-known fruit trees spread throughout both hemispheres. And all continents except one, you know which one, the orange does not like the cold.

Season and harvesting of the orange

The season starts in October; the orange warehouse in the Levante area depends on the earliest varieties of the Navel group, especially the Navelina variety. The orange season in Spain lasts until the end of July, where cold storage plays an essential role in preserving the oranges to extend their shelf life. Depending on the type of orange, its longevity in cold storage varies. We will go into more detail on this subject in the storage section below.

As far as orange harvesting in Spain is concerned, there are different post-harvest processes:

– Oranges that are harvested with a good internal ripening index but with scarce external ripening, that is to say, they keep the green colour, are submitted to a degreening process with ethylene.

– The tree’s growing stages must be taken into account to know when a tree is at its best. It is not until the second year that the tree starts to bear its first fruits. From 2 to 7 years, the tree is in the growth phase; in the 4th year, the production begins to be noticeable. From the tenth year onwards, the tree is considered an adult, and the production reaches its peak for the next 15 years.

The importance of a logistic warehouse for the conservation of oranges is key. This citrus fruit, one of the most consumed in the world, is very important for all the cold storage companies in the Levante area. With more than 3 million tonnes produced out of a world total of 70, Spain continues to be one of the top ten producing countries.

Countries such as Morocco, South Africa and Brazil have gained importance in the European market. They are supported by logistic warehouses where they store oranges in cold storage to extend their shelf life and then distribute them when Spanish production is unable to meet demand.

Oranges, a perishable foodstuff, require a storage temperature of between 4 and 8°C depending on the client’s requirements.

A key element in the good preservation of oranges is the loss of water after harvesting. Low temperatures and high relative humidity of around 95% reduce transpiration, slow down water loss, and reduce the development of pathogens, helping to extend the life of the orange.

Transport of oranges in Spain and the rest of Europe

Oranges are a commodity whose main export destinations are usually the: 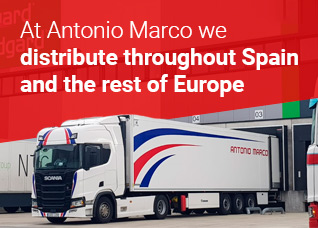 The ideal temperature for the transport of pomegranate is between 5-8ºC continuously. Although it is true that orange is a citrus fruit very similar to lemon, it does not suffer much from temperature changes in the short term. The transport companies of Alicante are focused on the international transport of oranges due to the proximity of the product and the know-how that we have achieved thanks to our years of experience.

We have seen that temperature-controlled storage is vital, but this work will mean nothing if we do not carry out optimum refrigerated transport of goods. Antonio Marco is clear that its Logistics in Alicante is more than prepared to carry out this task, thanks to its logistics centre in Alicante located in the Grenadine, Alicante.

At Antonio Marco we can help you with the transport and preservation of oranges with a guarantee and a good service.